One of the artists favourites of the named examples, Aquitania was a dual braked (air and vacuum) example by the early 1980’s based at Springs Branch, Wigan. It retained an operational train steam heating generator and was therefore a regular performer on passenger trains in winter time, until the end of its operating life in 1984. It was usually quite clean and one of the clear, noisy examples - giving very notable, angry and aggressive performances particularly during 1982. 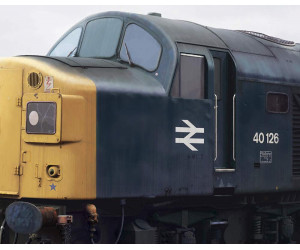